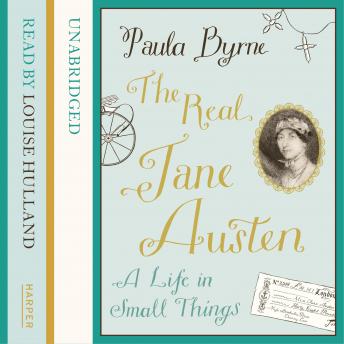 The Real Jane Austen: A Life in Small Things

Since her death , people have got Jane Austen wrong. The real Jane - revealed for the first time in this landmark biography - was a less cosy, more spiky, more modern figure than she is usually imagined to be. Far from retelling a familiar story, Byrne's book uses new research and new techniques to give us Jane Austen for the 21st century.

Paula Byrne - an internationally renowned Jane Austen scholar and a best-selling biographer - has uncovered a very different Jane Austen to the Jane of popular imagination.

This Jane is a woman deeply immersed in the culture around her, but also far ahead of her time in her independence and tough-mindedness.. Throughout, this audio-book gives the sense of Austen as an astute commentator on human nature in general and her own age in particular, and above all as a writer of independence and ambition.

Each chapter is focussed on a key moment in Austen's life: eg. when her handicapped brother is removed from the family, when her exotic cousin Eliza arrives in the family circle, when her aunt was arrested for shoplifting, her time alone in London. The book also gives detailed attention to the novels themselves.

After this book, no longer can Austen be viewed as someone who did not engage with the great political events of her time. How many lovers of her work are aware that the Prince Regent kept a debauched household down the road from her village, that she was related by marriage to other major literary figures of the time such as the libertine Gothic novelist William Beckford and her favourite poet George Crabbe. The book will also identify her long lost seaside love as well as argue that her assumed 'genteel' sense of humour could also be savage, highly subversive irony.

This title is due for release on January 17, 2013
We'll send you an email as soon as it is available!