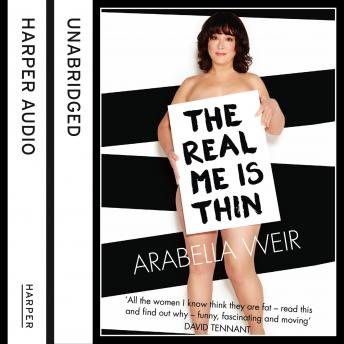 The Real Me is Thin

The hapless and hilarious tale of a life lived under the constant and ruthless reign of a chocolate biscuit...

Lumped into 'the too fat for potatoes group' by her mother, carefree eating isn't something Arabella Weir had much experience of growing up.

Written with startling frankness, Arabella unravels her own eating history in this humorous appraisal of our attitudes towards eating disorders and obesity. Not easy for someone who still can't be alone unsupervised in a room with a packet of chocolate biscuits.

Charting Arabella's neurotic relationship with food, from prolonged abstinence to binge eating, this humorous memoir recreates a childhood besieged with battles over food. Subjected to her mother's capricious feeding regime and taught early on that food was her enemy, happiness meant being allowed to eat what she liked - or more importantly what everyone else was eating.

Recounting stories of unhinged mothers and callous doctors, mystery-meat suppers, and egg custard battles with calculating boyfriends' mothers, this candid memoir vividly recreates a childhood and adolescence marred by the social embarrassment of being marked as different simply due to your weight.

Real Me is Thin