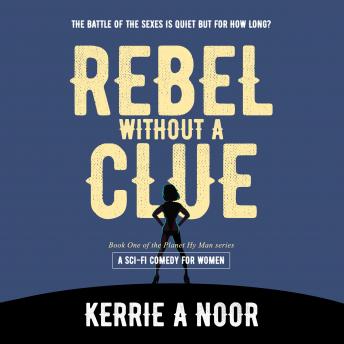 Rebel without a clue: A Sci Fi Comedy Where Women Rule

Planet Hy Man’s energy is running on empty and earth is their only hope. The only problem is, no one wants to go there.

Mex is ready to hang up her catsuit and watch the galaxy pass by. But when she is ordered to save Planet Hy Man or kiss her pension goodbye, she has no choice but to don her leathers and head to Scotland.

With no idea what the Scot’s are saying let alone what a latte is, Mex combs Glasgow. Confused, disoriented, and with a growing love for vodka she hits a mind blowing obstacle that knocks her for six…

Legless; an ancient man as elusive as the proverbial car keys has the formula.

Will Mex find him in time and if she does, will he be too Scottish to understand?

Rebel Without A Clue is the quirky first book in the Planet Hy Man science fiction comedy series. If you like high-mileage heroines, fast-paced satire, and meticulously crafted universes, then you’ll love Kerrie Noor’s otherworldly farce.

Buy Rebel Without A Clue and blast into a battle of the sexes today!

'This would be a good book for fans of Douglas Adams, Terry Pratchett, or Neil Gaiman.'★★★★★

Rebel without a clue: A Sci Fi Comedy Where Women Rule