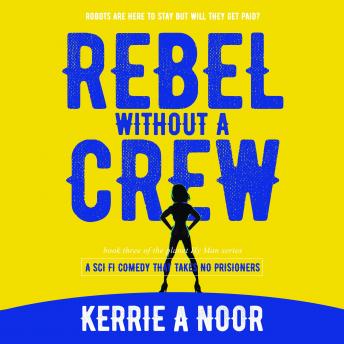 Rebel Without A Crew: A Sci Fi Comedy Where Women Run Riot

Planet H Man has toppled under the coup of the century and Mex must choose. Will she settled for her retirement fund or politicians too young to take seriously?

Planet Hyman is at a loss as their new and callous leader takes a sabbatical, she has found her 'pleasure dome' and while she learns there is more to life than a new manifesto, a coup rises to the occasion. With Mex hungover in Scotland there is little to stand in their way apart from a hippy colony too chilled to care, a reporter with no scruples, and a missing set of batteries.

The coup has plans to runs things the “proletarian way” they are young, idealistic, and haven’t tasted luxury yet. They almost make it, grab the operations room, when their new and callous leader arises from her pleasure dome and grabs back her throne.

Will Mex pick up her leathers and defend the coupe, or return to her planet to recuperate from a Scottish “good night out”?

Rebel Without A Crew is the quirky third book in the Planet Hy Man science fiction comedy series. If you like high-mileage heroines, fast-paced satire, and meticulously crafted universes, then you’ll love Kerrie Noor’s otherworldly farce.

Buy Rebel Without A Crew to blast into a battle of the sexes today!

Rebel Without A Crew: A Sci Fi Comedy Where Women Run Riot

This title is due for release on November 29, 2019
We'll send you an email as soon as it is available!