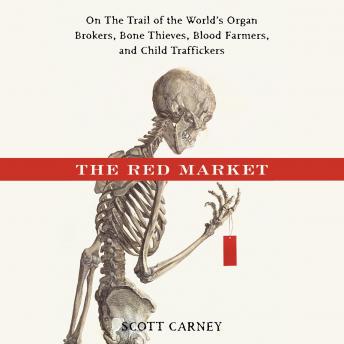 The Red Market: On the Trail of the World's Organ Brokers, Bone Thieves, Blood Farmers and Child Traffickers

Investigative journalist Scott Carney has spent five years on the ground tracing the lucrative and deeply secretive trade in human bodies and body parts--avast hidden economy known as the 'red market.' From the horrifying to the ridiculous, he discovers its varied forms: an Indian village nicknamed 'Kidneyvakkam' because most of its residents have sold their kidneys for cash; unscrupulous grave robbers who steal human bones from cemeteries, morgues and funeral pyres for anatomical skeletons used in Western medical schools and labs; an ancient temple that makes money selling the hair of its devotees to wigmakers in America--to the tune of $6 million annually; and the myriad of ways that the fertility business have allowed human embryos and surrogate wombs to answer to the logic of international markets.
The Red Market reveals the rise, fall and resurgence of this multi-billion dollar underground trade through history, from early medical study and modern universities to power-ravaged Eurasian villages and high-tech Western labs; from body snatchers and surrogate mothers to skeleton dealers and the poor who sell body parts to survive. While local and international law enforcement have cracked down, advances in science have increased demand for human tissue--ligaments, kidneys and even rented space in women's wombs--leaving little room to consider the ethical dilemmas inherent in the flesh-and-blood trade. At turns tragic, voyeuristic, and thought provoking, The Red Market is an eye-opening, surreal look at a little-known global industry and it's implications for all of our lives.