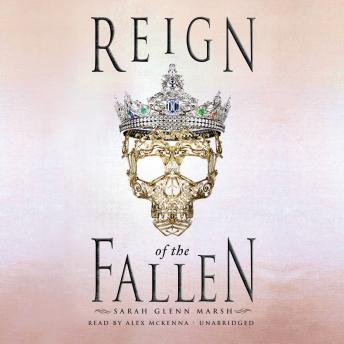 Reign of the Fallen

'This edgy fantasy doesn't just blur boundaries of genre, of gender, of past and present, life and death--it explodes them.' --Cinda Williams Chima, New York Times bestselling author of The Seven Realms and The Shattered Realms

Without the dead, she'd be no one.

Odessa is one of Karthia's master necromancers, catering to the kingdom's ruling Dead. Whenever a noble dies, it's Odessa's job to raise them by retrieving their soul from a dreamy and dangerous shadow world called the Deadlands. But there is a cost to being raised: the Dead must remain shrouded. If even a hint of flesh is exposed, a grotesque transformation begins, turning the Dead into terrifying, bloodthirsty Shades.

A dramatic uptick in Shade attacks raises suspicions and fears around the kingdom. Soon, a crushing loss of one of her closest companions leaves Odessa shattered, and reveals a disturbing conspiracy in Karthia: Someone is intentionally creating Shades by tearing shrouds from the Dead--and training them to attack. Odessa is forced to contemplate a terrifying question: What if her magic is the weapon that brings the kingdom to its knees?

Fighting alongside her fellow mages--and a powerful girl as enthralling as she is infuriating--Odessa must untangle the gruesome plot to destroy Karthia before the Shades take everything she loves.

Perfect for fans of Three Dark Crowns and Red Queen, Reign of the Fallen is a gutsy, unpredictable read with a surprising and breathtaking LGBT romance at its core.

Reign of the Fallen