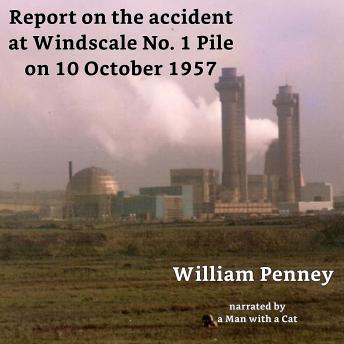 Report on the accident at Windscale No. 1 Pile on 10 October 1957: The Penney Report

Narrated By: Man With A Cat

A serious fire developed in the core of a nuclear reactor at Windscale Works, Sellafield, northwest England, which led to the release of significant quantities of radioactive material into the environment during 10-11th October, 1957. In 1957, Windscale Works was operated by the United Kingdom Atomic Energy Authority (UKAEA), and on 15th October it was announced by the Chairman of the UKAEA that a Committee of Inquiry had been established under the chairmanship of Sir William Penney to conduct an investigation into the accident. The Committee reported to the Chairman of the UKAEA on 26th October.

The Penney Report itself was not published, and was only made public via The National Archives in January, 1988

Report on the accident at Windscale No. 1 Pile on 10 October 1957: The Penney Report