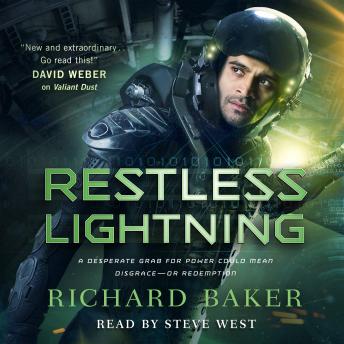 Richard Baker continues the adventures of Sikander North in Restless Lightning, the second audiobook in his new military science fiction series, Breaker of Empires, and sequel to Valiant Dust.
Lieutenant Sikander North has avoided an outright court martial and finds himself assigned to a remote outpost in the crumbling, alien Tzoru Empire-where the navy sends trouble-makers to be forgotten. When Sikander finds himself in the middle of an alien uprising, he, once again, must do the impossible: smuggle an alien ambassador off-world, break a siege, and fight the irrational prejudice of his superior officers. The odds are against his success, and his choices could mean disgrace-or redemption.
Breaker of Empires
#1 Valiant Dust
#2 Restless Lightning