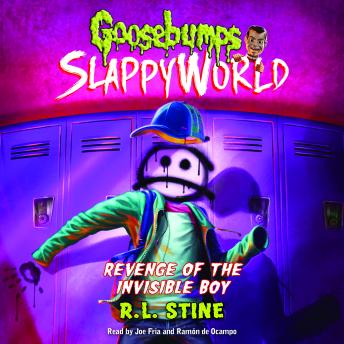 Revenge of the Invisible Boy

A brand-new Goosebumps arc narrated by the most iconic and evil character of the series, Slappy!
Frankie Miller and his friends have a Magic Club. They meet every week to learn new tricks and perform for each other. It's supposed to be fun, but there's always one problem: Ari Goodwin. He's a pest! He ruins their tricks and makes fun of them.
When Frankie's friend Melody Richmond finds a recipe in an old book to turn a person invisible, they decide to try it out on Ari.
But he's on to them. He's switched the cups and now Frankie's the one who's invisible. There must be an antidote in the book, but
Melody can't find it. It's missing!
Now Frankie is changing. He's angry and he wants revenge. Can Melody find the antidote or will Frankie's greatest trick turn
everyone invisible?

Revenge of the Invisible Boy