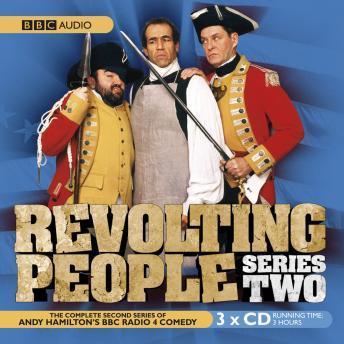 In this second series of Andy Hamilton’s hit comedy, it’s business as usual for Baltimore shopkeeper Samuel Oliphant and family - in other words, chaos and confusion. Samuel yearns for a quiet life, but with two difficult daughters; a huge, dimwitted son; a pompous son-in-law and a brace of British officers to deal with, there is little chance of that. These six episodes see the return of Samuel’s wife, the birth of Cora’s baby,and Samuel’s store facing competition from a new super-emporium. Meanwhile, Mary climbs into bed with Captain Brimshaw, Sergeant McGurk takes up spying, and Samuel is left a fortune - on the condition that his family can fulfil puritanical Aunt Sybil’s final wish. There’s yet more trouble in store when Mary is wooed by a newly-arrived Captain (who, unbeknown to her, has recently been named ‘Cad of the Year’ by the Bounder’s Gazette) and Ezekiel discovers the truth about his ginger baby, and sets out to track down the father... Starring Jay Tarses, James Fleet and Andy Hamilton, alongside Jan Ravens ('Dead Ringers') and Michael Fenton Stevens ('Trevor’s World of Sport'), 'Revolting People' makes the historical hysterical.