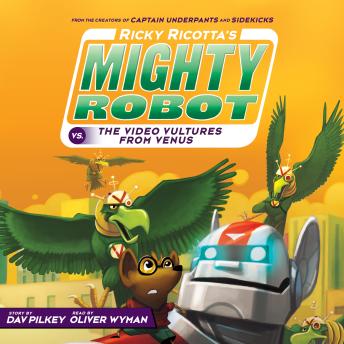 Ricky Ricotta's Mighty Robot vs. the Video Vultures from Venus (Book 3): Giant Robot Vs. The Voodoo Vultures From Venus

Victor Von Vulture hates the planet Venus! It's so hot that his food is always ruined-his grilled cheese sandwiches are way too gooey. And his candy bars get so mushy, he has to drink them with a straw! What's a vulture to do? Move to the planet next door-Earth-where the food is much better.

Victor Von Vulture and his army of Vultures invade the Earth by broadcasting a voodoo ray through all the televisions in the world. That same night, Ricky Ricotta and his Robot are grounded for flying to Hawaii and being late for dinner . . . so, unlike the rest of the planet, they're not allowed to watch TV. The next day at school, Ricky realizes something very strange has happened: Everyone is walking around in daze and carrying food toward the center of town. There, Victor Von Vulture and his Voodoo Vultures are devouring every bite of food in sight.

Fortunately for the rest of us, Ricky Ricotta serves those Vultures a big surprise! With the help of his giant Robot, Ricky saves the day once again.