The Ritual: Now A Major Film, The Most Thrilling Chiller You'll Read This Year 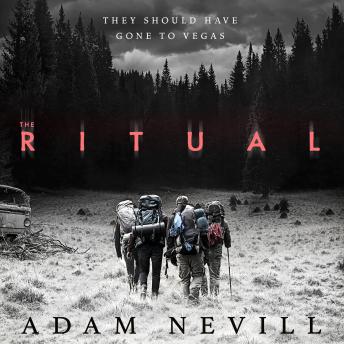 Adam Nevill's The Ritual is an August Derleth Award winner.
It was the dead thing they found hanging from a tree that changed the trip beyond recognition.
When four old University friends set off into the Scandinavian wilderness of the Arctic Circle, they aim to briefly escape the problems of their lives and reconnect. But when Luke, the only man still single and living a precarious existence, finds he has little left in common with his well-heeled friends, tensions rise.
A shortcut meant to ease their hike turns into a nightmare scenario that could cost them their lives. Lost, hungry, and surrounded by forest untouched for millennia, things couldn't possibly get any worse.
But then they stumble across an old habitation. Ancient artefacts decorate the walls and there are bones scattered upon the floors. The residue of old rites for something that still exists in the forest. Something responsible for the bestial presence that follows their every step. And as the four friends stagger in the direction of salvation, they learn that death doesn't come easy among these ancient trees . . .

Ritual: Now A Major Film, The Most Thrilling Chiller You'll Read This Year

This title is due for release on May 20, 2011
We'll send you an email as soon as it is available!