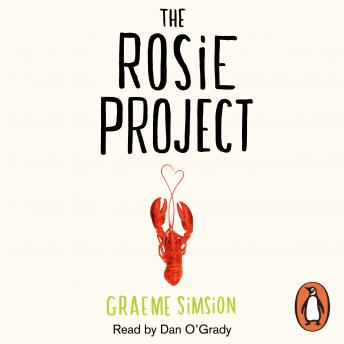 'Marvellous' John Boyne, author of The Boy in the Striped Pyjamas
'Adorable... A gem of a book' Marian Keyes

The Rosie Project by Graeme Simsion is a story about love, life and lobsters...

Meet Don Tillman.
Don is getting married.
He just doesn't know who to yet.
But he has designed a very detailed questionnaire to help him find the perfect woman.
One thing he already knows, though, is that it's not Rosie.
Absolutely, completely, definitely not.

Telling the story of Rosie and Don, Graeme Simsion's The Rosie Project is an international phenomenon, sold in over thirty countries - and counting.

Don Tillman is a socially challenged genetics professor who's decided the time has come to find a wife. His questionnaire is intended to weed out anyone who's unsuitable. The trouble is, Don has rather high standards and doesn't really do flexible so, despite lots of takers - he looks like Gregory Peck - he's not having much success in identifying The One.
When Rosie Jarman comes to his office, Don assumes it's to apply for the Wife Project - and duly discounts her on the grounds she smokes, drinks, doesn't eat meat, and is incapable of punctuality. However, Rosie has no interest in becoming Mrs Tillman and is actually there to enlist Don's assistance in a professional capacity: to help her find her biological father.
Sometimes, though, you don't find love: love finds you...

Like The Unlikely Pilgrimage of Harold Fry, The Rosie Project by Graeme Simsion is a truly distinctive debut. With the charm of Mark Haddon's The Curious Incident of the Dog in the Night-Time and the romance of David Nicholls' One Day, it's both funny and endearing - and is set to become the feel-good novel of 2013...