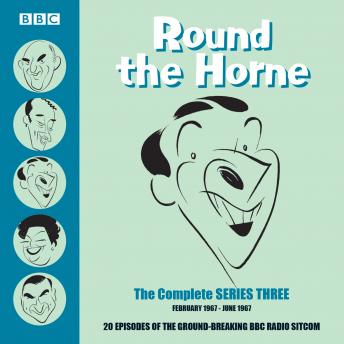 Round the Horne: The Complete Series Three: 16 episodes of the groundbreaking BBC Radio comedy

Round the Horne arrived on BBC radio in 1965, bringing laughter to Sunday lunchtimes throughout the land. It carved a niche in the history of broadcast comedy, a sketch show which prodded the boundaries of propriety and innuendo. At its heart was the suave and upstanding Kenneth Horne, around which revolved the multiple naughty personas of Kenneth Williams, Betty Marsden, Hugh Paddick and Bill Pertwee.

Among the parade of regular characters were Julian and Sandy, the camp couple of resting thespians happy to turn their hands to anything, Rambling Syd Rumbo the musical cordwangler, Fiona and Charles the passionate duo, and J. Peasemold Gruntfuttock the world's dirtiest man. Meanwhile regular film parodies, spoof sagas and musical interludes peppered the mix.

Round the Horne earned its place in the annals of comedy history, and is fondly remembered today as a groundbreaking series that influenced many more to come.

Round the Horne: The Complete Series Three: 16 episodes of the groundbreaking BBC Radio comedy