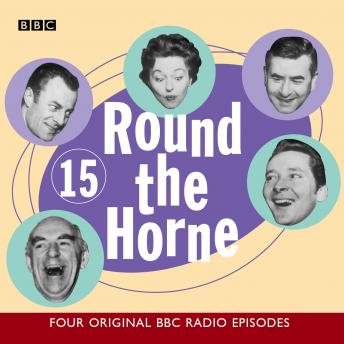 Round The Horne Vol 15

How lovely it is to once again vada the dolly old eek of Round the Horne, the radio comedy series which ventured where few had gone before in the late 1960s. For four series, suave and unruffled host Kenneth Horne battled manfully with a marauding parade of characters, from enterprising chorus boys Julian and Sandy to warbling songsmith Rambling Syd Rumpo, booming Daphne Whitethigh and breathless thespians Charles and Fiona. In this collection, Kenneth Horne has a lost of bother with The Nuclear Banana, Seamus Android interviews Zsa Zsa Poltergeist and the Gaylords turn up in 'Kenneth Horne's Theatre of Suspense'. Also, Rambling Syd performs the Cornish Scrumpy Dance, Julian and Sandy unveil Bona Beat Songs Ltd and the cast say Goodbye (until next time...) Includes these four episodes: Series Two, Episode 5 (10 April 1966); Series Two, Episode 11 (22 May 1966); Series Three, Episode Twelve (30 April 1967) and Series Three, Episode 20 (25 June 1967).

Round The Horne Vol 15