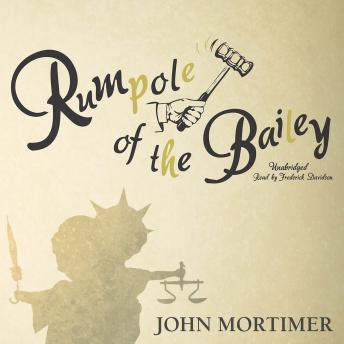 Horace Rumpole, the irreverent, iconoclastic, claret-swilling, poetry-spouting barrister-at-law, is among the most beloved characters of English crime literature. He is not a particularly gifted attorney, nor is he particularly fond of the law by courts if it comes to that, but he'd rather be swinging at a case than bowing to his wife, Hilda-"She Who Must Be Obeyed."
In this first title of the popular series featuring Rumpole, all of the major characters who occupy the Rumpole stories make their introductions: the sneaky, slightly effeminate Erskine-Brown; the bumbling Guthrie Featherstone; and various and sundry other lawyers and clerks whose lives weave in and out of these stories. These six stories include "The Younger Generation," "The Alternative Society," "The Honorable Member," "The Married Lady," "The Learned Friends," and "The Heavy Brigade."