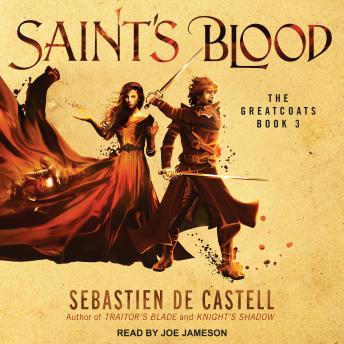 How do you kill a Saint?

Falcio, Kest, and Brasti are about to find out, because someone has figured out a way to do it and they've started with a friend.

The Dukes were already looking for ways out of their agreement to put Aline on the throne, but with the Saints turning up dead, rumours are spreading that the Gods themselves oppose her ascension. Now churches are looking to protect themselves by bringing back the military orders of religious soldiers, assassins, and (especially) Inquisitors-a move that could turn the country into a theocracy. The only way Falcio can put a stop to it is by finding the murderer. He has only one clue: a terrifying iron mask which makes the Saints vulnerable by driving them mad. But even if he can find the killer, he'll still have to face him in battle.

And that may be a duel that no swordsman, no matter how skilled, can hope to win.