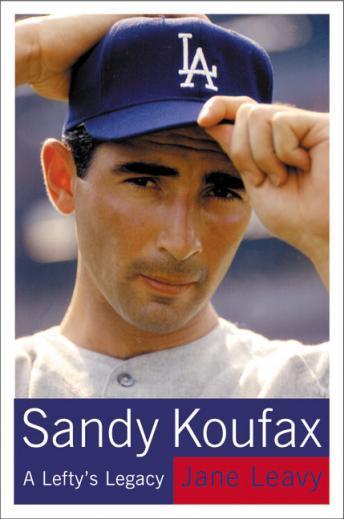 In an era when too many heroes have been toppled from too many pedestals, Sandy Koufax stands apart and alone, a legend who declined his own celebrity. As a pitcher, he was sublime, the ace of baseball lore. As a human being, he aspired to be the one thing his talent and his fame wouldn't allow: a regular guy. A Brooklyn kid, he was the product of the sedate and modest fifties who came to define and dominate baseball in the sixties. In Sandy Koufax: A Lefty's Legacy, former award-winning Washington Post sportswriter Jane Leavy delivers an uncommon baseball book, vividly re-creating the Koufax era, when presidents were believed and pitchers aspired to go the distance.

He was only a teenager when Dodgers owner Walter O'Malley proclaimed him "the Great Jewish Hope" of the franchise. But it wasn't until long after the team had abandoned Brooklyn that the man became the myth. Old-fashioned in his willingness to play when he was injured and in his acute sense of responsibility to his team, Koutax answered to an authority higher than manager Walter Alston. When he refused to pitch the opening game of the 1965 World Series because it fell on Yom Kippur, the holiest day of the Jewish calendar, he inadvertently made himself a religious icon and an irrevocably public figure. A year later, he was gone -- done with baseball at age thirty. No other sports hero had retired so young, so well, or so completely.

Despite Sandy Koufax's best efforts to protect his privacy, his legend has grown larger ever since. Part biography, part cultural history, Sandy Koufax: A Lefty's Legacy gets as close to that legend as he will allow. Through meticulous reporting and interviews with five hundred of his friends, teammates, and opponents, Leavy penetrates the mythology to discover a man more than worthy of myth.