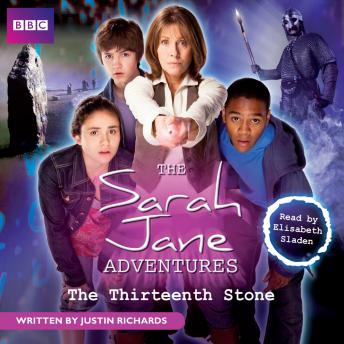 A stone circle spells danger for Sarah Jane Smith and friends in a thrilling new adventure read by Elisabeth Sladen.Sarah Jane is helping out on a school trip with Luke, Maria, and Clyde's class. On the way home, the group stop off at The Stone Whisperers, a dozen standing stones enclosed by a dome. Set apart from the circle is a 13th stone: the King Stone. Legend has it that this is an evil king who was captured in battle by 12 knights, and turned to stone. To keep him imprisoned, the knights too turned to stone, holding him forever in their power. Nice story, but it's just a myth - isn't it?
Luke finds himself strangely drawn to the King Stone. Over two metres high, and covered in moss, it glows with a strange, unearthly light. But when the secret of the stones is finally revealed, the school party's enthusiasm turns to terror.
©2007 Justin Richards (P)2007 BBC Audiobooks Ltd