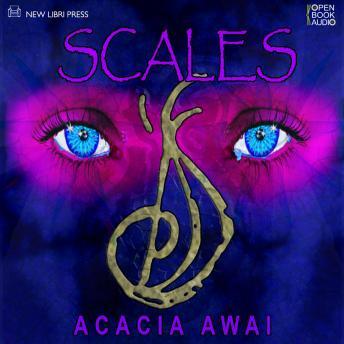 Vivian Blue had always been a little different. She had no idea how different until Hatch Lancaster, a wealthy, handsome, and mysterious man, enters her life on a secret mission. Within a short time, Hatch becomes her boss, her friend, and the man who haunts her heart and her dreams. With Hatch's help, Blue begins to uncover truths about herself and her past, and soon discovers that nothing in her life is as it appears to be.

Surrounded by subterfuge and unidentified danger, Blue is left with Hatch as her only protection and defense. As she turns to Hatch for protection, however, she begins to wonder whether the danger comes from the secrets in her past or from Hatch himself. A truly powerful dragon, Hatch is torn between his growing attraction to Blue, his responsibilities to his homeland, and perhaps most importantly, the future of dragonkind.

The debut novel by author Acaica Awai, Scales is a new and modern take on the legend of dragons and dragonkind, reinventing the mythology surrounding these fantastic creatures. Set against the backdrop of beautiful Maui, Hawaii, Scales introduces readers to a new world of adventure, excitement, and romance.