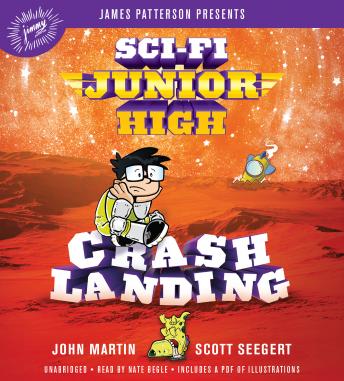 Kelvin is the new kid at Sci-Fi Junior High -- a floating space station filled with alien kids form across the universe. And he arrived just in time for the annual school dance: The Galactic Get Down!

Kelvin is desperate to take luminous Luna (her species literally glows), but now that his secret about not being a Mega Supergenius is out, Kelvin doesn't have a shot. He has to think of a way to become super cool so everyone forgets he lied about his average intelligence . . . cue mad scientist Erik Failenheimer's escape from his asteroid prison, an army of Pinions (any similarities to the MinionsTM is purely coincidental), and a battle to save Sci-Fi Junior High from imminent doom. Let's dance!

'Saving the universe has never been so much fun!' -- Gordon Korman, #1 New York Times bestselling author of 39 Clues and Masterminds on Sci-Fi Junior High.