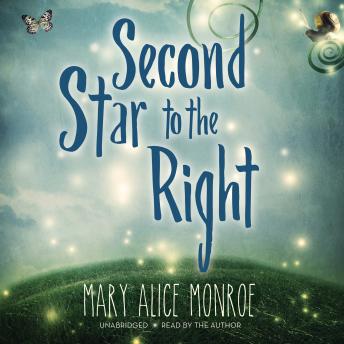 Second Star to the Right

Sometimes fairy talesdo come true...
As a single mother of two, Faye O'Neill has no time forfairy tales. She's not even certain she believes in luck. Practical, smart, anddesperate to escape a shadowy past, Faye takes a job at a top advertising firmin London where she hopes she and her children can find a fresh start. When shefinds the beautiful two-story flat for rent in a stately old Victorian completewith a neglected but tumbling English garden, she can scarcely believe her goodfortune. But it isn't long before Faye realizes not everything in the old homemay be as peaceful as it seems.
A strange light begins to appear in her children's rooms atnight, and then there's the reclusive elderly tenant, Crazy Wendy, her landladywarned her to steer clear of, the woman who spends her evenings spying onFaye's children from her garret-room window. The woman who believes she isPeter Pan's Wendy. To make matters worse, Faye, who has sworn off men, discoversher downstairs neighbor Jack is a disturbingly handsome professor with a talentfor charming women and children alike. Before she knows it, Faye has embarkedupon a whole new adventure into a world where anything might be possible, wherebroken hearts can be healed by a kiss, and where Neverland may not be a placeof fables but a forgotten land one can still find if they are only brave enoughto follow the second star to the right.

Second Star to the Right