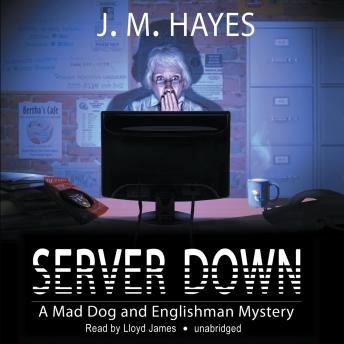 Server Down: A Mad Dog and Englishman Mystery

Attending the Yaqui tribe’s Easter Ceremonies in Tucson should be a dream come true for a Cheyenne-wannabe-shaman like Mad Dog. But immediately after his arrival, he is accused of being a witch. Moments later a policeman is murdered, and suddenly Mad Dog is the target of a city-wide manhunt. Mad Dog’s niece, Heather English, comes to Tucson to try to arrange a peaceful surrender or clear her uncle by finding the real killer.

Back in Kansas, someone has blown Mad Dog’s house off the face of the Great Plains. Sheriff English, investigating that crime, learns Mad Dog has been playing a massive online game: War of Worldcraft. There, a vampire wizard has been tormenting him, and Mad Dog claims the creature has reached out of the game to come after him in the real world. The sheriff isn’t convinced...until he begins receiving threats from a vampire wizard on his office computer.

“The crimes, connected by the hypnotic War of Worldcraft computer game, ensure headlong pace and wrenching plot twists, but the book’s real strength is the way it depicts computer gaming’s destruction of the player’s ability to distinguish between reality and fantasy, with such actual consequences as election fixing and police corruption.”—Publishers Weekly

Server Down: A Mad Dog and Englishman Mystery