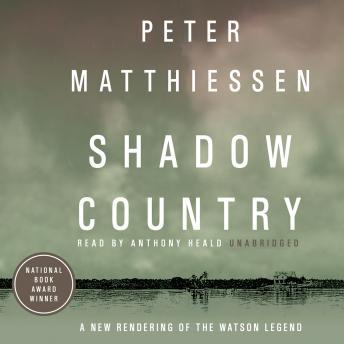 Shadow Country: A New Rendering of the Watson Legend

Shadow Country is Peter Matthiessen’s reimagining of the legend of E. J. Watson, the Everglades sugarcane planter and notorious outlaw of the wild Florida frontier. Vividly capturing the American hinterlands at the turn of the twentieth century, it traces the story of Watson through eyewitness perspectives as he drives himself relentlessly toward his own violent end at the hands of neighbors who mostly admired him.
Shadow Country traverses strange landscapes and frontier hinterlands inhabited by Americans of every provenance and color, including the black and Indian inheritors of the archaic racism that, as Watson’s wife observed, “still casts its shadow over the nation.” Originally written as three separate, acclaimed novels, this is Matthiessen’s bold new distillation of his monumental work. Tightened and brilliantly rewritten throughout, he has collapsed the time frame while deepening the insights and motivations of his characters, achieving his original vision of the Watson trilogy.

Shadow Country: A New Rendering of the Watson Legend

This title is due for release on February 4, 2009
We'll send you an email as soon as it is available!