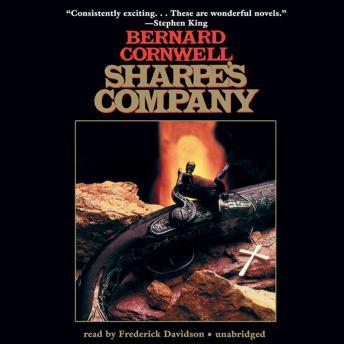 Sharpe's Company: Richard Sharpe and the Siege of Badajoz, January to April 1812

In an age of heroes and death before dishonor, one man stands above the rest.
It is January 1812. Captain Richard Sharpe has one mission: to thwart Napoleon’s dreams of an empire. To accomplish that goal, Sharpe and the fighting men of the Light Company must seize the fortress of Badajoz, which looms on the border of Portugal and Spain. To lead an assault on its thick, sheer walls and battlements is suicide, yet Sharpe has no choice, for the stakes have suddenly become personal. Inside the walls are his wife and daughter, and only he can save them.
Outside is the misshapen, vengeance-crazed Sergeant Obadiah Hakeswill, a man determined to kill Sharpe. Sharpe knows that in the heat of battle, only the cold steel of his battered sword and the ruthless bloodlust of a soldier at war will protect him from the danger of both sides.

Sharpe's Company: Richard Sharpe and the Siege of Badajoz, January to April 1812