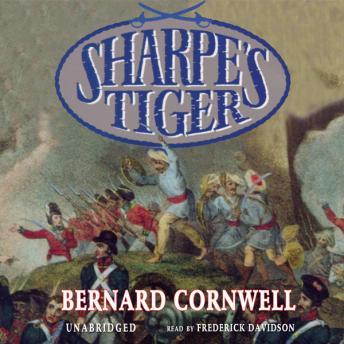 In 1799, the British Army is fighting its way through India in an attempt to push the ruthless Tippoo of Mysore from his throne and drive his French allies out. Posing as a deserter, the young and illiterate private Richard Sharpe must penetrate into the Tippoo’s city and make contact with a Scottish spy being held prisoner there. Success will mean winning his sergeant stripes; failure, being turned over to the Tippoo’s brutal executioners—or his man-eating tigers.
Along the way, Sharpe keeps an eye out for beautiful prostitutes, any stray loot he can get his hands on, and the chance to learn his ABCs. But when the furious British assault on the city begins, Sharpe must fight with the fierceness and agility of a tiger himself to foil the Tippoo’s well-set trap—and to keep from being killed by his own side.