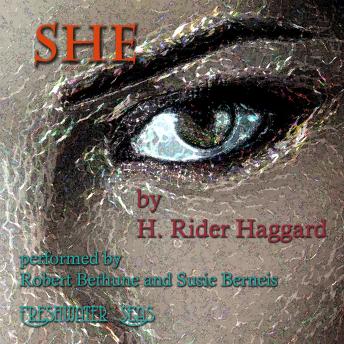 At one point in his moody, erotic, and barbarous romance of She, H. Rider Haggard puts into the mouth of his narrator, Horace L. Holly, the observation that her story "sounded like some extraordinary invention of a speculative brain." That, precisely, is what She is: a really marvelously inventive story, combining an amazing variety of what should be utterly implausible ideas into a fabric that constantly feels like truth. Even though we know that there was never a diabolical, immortal, fantastically beautiful white queen ruling over a barbarous tribe of cannibals in the heart of what is now Mozambique, it is hard to resist the impulse to pull up the map and muse about where she might have been hidden.

As we get to know Her, H. Rider Haggard ensures that the mystery only deepens. We see her dispense cruel swift justice; we see her indulge murderous passion; we see her show superhuman devotion; we see her speak from the wisdom gathered in her twenty centuries of life. We can never be sure just who or what she is.

We see Her through the eyes of Haggard's protagonist, Holly, a Cambridge don utterly out of his depth in a wild and savage world, utterly English to the core, which is what sees him through in the end. Bitter, misogynistic, and more than mildly racist, we know he is also a devoted father to his adopted son Leo, who turns out to be the carrier of an incredible fate, and an unusually determined survivor. We have no trouble believing in Holly, and thereby we suspend belief and accept his tale.

There was a strong streak of racism and anti-Semitism in Victorian England, and Haggard was not proof against it. We have not altered or omitted such passages, but rather have left them as Haggard wrote them. We do well to remember that, just as Haggard fell prey to such thinking from time to time, so too can we, despite all our modern enlightenment.

This title is due for release on December 31, 2015
We'll send you an email as soon as it is available!