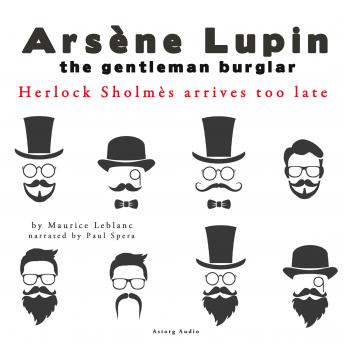 Sherlock Holmes arrives too late, The adventures of Arsène Lupin

The Extraordinary adventures of Arsène Lupin include one of the earliest forms of crossover, with the parodic "Sherlock Holmes arrives too late". This short story is a delightful confrontation between two legendary characters: Arsène Lupin, the most famous thief in the world of literature, daring, bold and elegant, and Sherlock Holmes, the clever detective from Baker Street. This episode engages them in a battle of wit, as Holmes is called to solve an ancient riddle and protect an art collection from the Gentleman Thief who expressed an unwelcome interest. On his way to meet the authorities, Holmes bumps into a hurrying stranger...
This adventure has also been published as "Herlock Sholmès Arrives Too Late", for obvious copyright reasons. Enjoy the confrontation between two of the best minds in the world of fiction!

Sherlock Holmes arrives too late, The adventures of Arsène Lupin