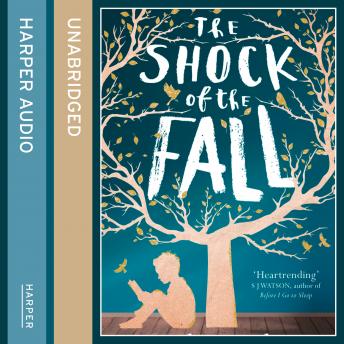 The Shock of the Fall

WINNER OF THE COSTA BOOK OF THE YEAR 2013


WINNER OF THE SPECSAVERS POPULAR FICTION BOOK OF THE YEAR 2014


WINNER OF THE BETTY TRASK PRIZE 2014


'I'll tell you what happened because it will be a good way to introduce my brother. His name's Simon. I think you're going to like him. I really do. But in a couple of pages he'll be dead. And he was never the same after that.'

There are books you can't stop reading, which keep you up all night.


There are books which let us into the hidden parts of life and make them vividly real.


There are books which, because of the sheer skill with which every word is chosen, linger in your mind for days.


The Shock of the Fall is all of these books.


The Shock of the Fall is an extraordinary portrait of one man's descent into mental illness. It is a brave and groundbreaking novel from one of the most exciting new voices in fiction.


'A stunning novel. Ambitious and exquisitely realised, it's by turns shocking, harrowing and heartrending. The writing is so accomplished it's hard to believe it's a debut - it's clearly the work of a major new talent' S J WATSON


'Nathan Filer is following in the footsteps of Mark Haddon's genre-setting The Curious Incident Of The Dog In The Night-Time. Both funny and painful... you're going to love it' DAILY MAIL


'A compelling story of grief, madness and loss. Filer has an ear for the dark comedy of life, and Matthew is a charismatic lead character who draws you in even as his world falls apart'
OBSERVER MAGAZINE


'A tragic and comic account of living with schizophrenia. A must for fans of Matthew Quick's The Silver Linings Playbook'
GQ

Shock of the Fall