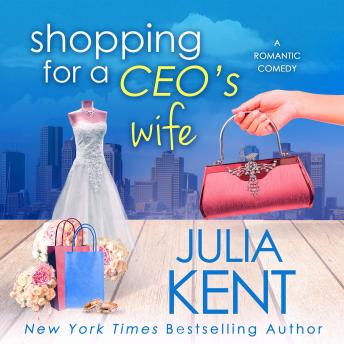 Shopping for a CEO's Wife

**Narrated by Audie award winner Amy McFadden**
Snowbound. Sounds so romantic, with visions of cuddling before a roaring fire, hot chocolate spiked with brandy, and a secret elopement.
Wait. What?
My fiancé's father won't stop trying to turn our pending wedding into a three-ring media circus so he can get free publicity for his family's Fortune 500 company. My mother has decided she's done with All Things Wedding and asks her teacup Chihuahua for mother-of-the-bride advice.
They've all gone certifiably mad.
Then the stress from the wedding puts my mother in the hospital, I scream at my future father-in-law in front of a camera crew and the video goes viral, and the romantic wedding that started with Andrew's grand Pride and Prejudice proposal looks less like Jane Austen and more like Dostoyevsky.
So what do you do when you're a fixer and you can't fix something?
You give up on it.
Not on Andrew, silly.
The wedding.
Shopping for a CEO's Wife is the 12th book in Julia Kent's New York Times bestselling Shopping series. As Shannon and Declan enjoy their newlywed bliss, Andrew's father wants to exploit Amanda and Andrew's nuptials, much to Amanda's chagrin. Can she learn to stand up to her future father-in-law and fight for what's right? But the real question is: will Spritzy the teacup Chihuahua end up being a flower girl?

Shopping for a CEO's Wife

This title is due for release on August 27, 2017
We'll send you an email as soon as it is available!