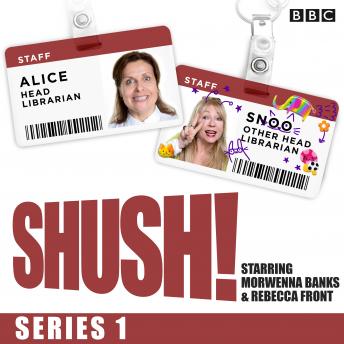 Morwenna Banks and Rebecca Front star in a brand new comedy set in a library. Meet Alice, a former child prodigy who's scared of everything - except libraries and her colleague Snoo, a slightly confused individual with a have-a-go attitude to life, marriage, haircuts and reality. Forever popping into the library is Dr. Cadogan, celebrity doctor to the stars and a man with his finger in every pie. Their happy life is interrupted by the arrival of Simon Nielson, a man with a mission to close down inefficient libraries...

Also featuring Michael Fenton-Stevens and Ben Willbond, Shush! is produced by Pozzitive, whose other hit series include Cabin Pressure, Thanks A Lot, Milton Jones!, Jeremy Hardy Speaks To The Nation, The Brig Society, The Castle, Armando Iannucci’s Charm Offensive and Kevin Eldon Will See You Now...