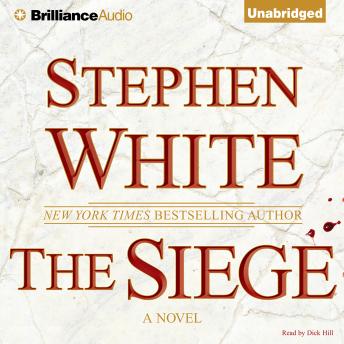 As a lovely weekend approaches on the Yale campus it appears that a number of students-including the sons of both the secretary of the army and newest Supreme Court justice-may have gone missing. Kidnapping? Terrorism? The authorities aren't sure. But the high-profile disappearances draw the attention of the CIA and the FBI's vaunted Hostage Rescue Team. Attention quickly focuses on the fortresslike tomb of one of Yale's oldest secret societies. Suspended Boulder police detective Sam Purdy soon finds himself in New Haven, where he is suddenly snared by an unlikely pair of Feds: FBI agent Christopher Poe and CIA analyst Deirdre Drake. When an unknown enemy starts releasing hostages, one by one, out of the building's front door to die, Sam, Poe, and Dee join together, desperately trying to solve the riddle of what is going on inside the windowless stone tomb on the edge of campus. In The Siege, New York Times bestselling author Stephen White delivers a pulse-pounding thriller that begs the questions: What if the next terrorist threat has a different set of rules that exploits weaknesses we never knew we had? How should we respond? And what happens when one of us is asked to make an unimaginable sacrifice to protect our neighbors?

This title is due for release on April 8, 2009
We'll send you an email as soon as it is available!