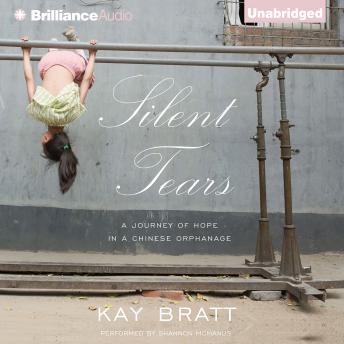 When her family relocated to rural China in 2003, Kay Bratt was thrust into a new world, one where boys were considered more valuable than girls and poverty and the one-child policy had created an epidemic of abandoned infants. As a volunteer at a local orphanage, Bratt witnessed conditions that were unfathomable to a middle-class mother of two from South Carolina. Based on Bratt's diary of her four years at the orphanage, Silent Tears offers a searing account of young lives rendered disposable. In the face of an implacable system, Bratt found ways to work within (and around) the rules to make a better future for the children, whom she came to love. The book offers no easy answers. While often painful in its clear-sightedness, Silent Tears balances the sadness and struggles of life in the orphanage with moments of joy, optimism, faith, and victory. It is the story of hundreds of children - and of one woman who never planned on becoming a hero but became one anyway.