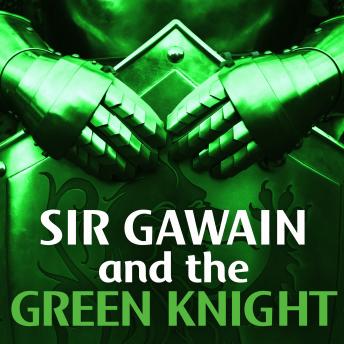 Sir Gawain and the Green Knight

King Arthur loved Christmas and New Year - it was an excellent excuse for feasting, exchanging gifts and a time for general good fellowship among the knights at Camelot. And he wouldn't stop feasting until some marvellous adventure had befallen either him or one of his companions. One year, there was an adventure to top the lot.

An enormous knight rides into the hall dressed in green. Everything is green. His hair and beard are green. Even his horse is green.

"I am known as 'The Green Knight', replies the stranger to no-one's surprise, and proposes that someone in the court strikes him once with his axe, on condition that the Green Knight can return the blow one year and one day later. Gawain volunteers, picks up an axe, and lops off the Green Knight's head, thinking this will mark the end of a rather stupid game. But no. Cool as you like, the Green Knight picks up his head, reminds Gawain of his promise, and rides off, leaving the entire Round Table gawping in amazement and Gawain rather apprehensive about what will happen in 366 days' time . . .

This wonderful, good-natured adventure was written sometime in the late 14th century by an excellent poet based, we think, somewhere in Cheshire. Not only has the tale come down to us intact (unlike much Arthurian literature), it has captured readers' (and listeners') imaginations for over 600 years. Tolkien was a fan and produced a translation from the Middle English, and Sean Connery starred as the Green Knight in a 1984 movie.

What you'll hear on this audio is a faithful translation of the original by Jessie L. Weston, a scholar and poetess of whom TS Eliot was much enamoured.

Sir Gawain and the Green Knight