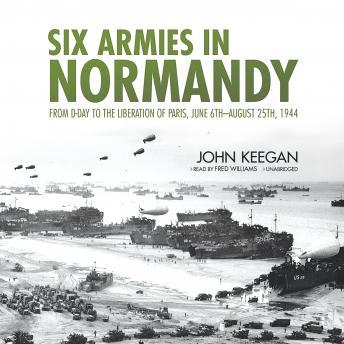 Six Armies in Normandy: From D-Day to the Liberation of Paris, June 6th-August 25th, 1944

In burnished, driving prose, John Keegan chronicles the 1944 invasion of Normandy, from D-day to the liberation of Paris. At the same time, he furthers his exploration of the "role which warfare and its institutions play in social life" by showing how each of the six armies, while resembling one another in purpose and authority, is a mirror of its own nation's values. Each army is shown at successive stages of the invasion in a battle sequence testing them to the utmost: the Americans in their terrifying night drop on the eve of landings, the Canadians at the Omaha beachhead, the English savagely fighting their way inland, the Germans in their surprisingly strong resistance, the Poles in exile desperately blocking the German escape route, and the French at last liberating their City of Light. This extraordinary book is a shining addition to the dramatic literature of men at war.

Six Armies in Normandy: From D-Day to the Liberation of Paris, June 6th-August 25th, 1944