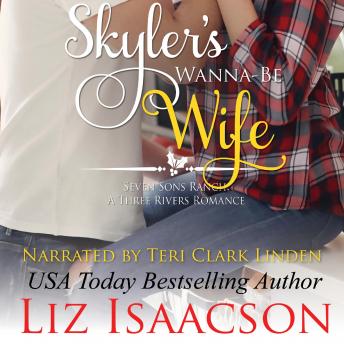 She needs a new last name to stay in school. He's willing to help a fellow student. Can this wanna-be wife show the playboy that some things should be taken seriously?


Mallery Viera only has two semesters left to finish her degree. But her green card has expired, and she accidentally filed the wrong paperwork to renew it. In order to stay in the country and finish her education, she needs to get married.


When she pours out her heart to Skyler Walker, she has no idea who she's talking to. He's just the man she's known for a couple of years that makes her laugh, the man she runs with in the morning, the man she may have crushed on a time or two. She doesn't know about his billions in the bank, or the sprawling ranch in Three Rivers, or the five brothers who've managed to turn their fake marriages into lasting happiness.


He figures he might be able to do the same, and he tells Mal he'll marry her. She's shocked, but desperate enough to go along with the plan. As she spends more time with the real Skyler Walker, she realizes Skyler has more to offer than just laughs and a new last name. He's got plans and dreams too, and Mal finds herself wanting to help him just as he has her.


Can Mal and Skyler take their relationship past the superficial to find a deep happily-ever-after?

This title is due for release on December 18, 2020
We'll send you an email as soon as it is available!