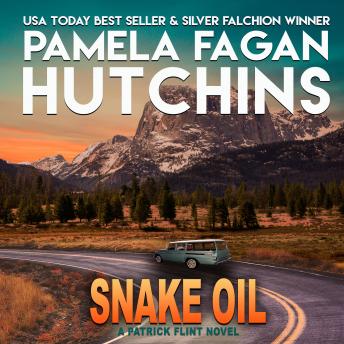 A doctor on a quest to make a difference. A flirty widow with a suspiciously dead husband. Stranded on the Wind River Indian Reservation in a deadly blizzard, Patrick Flint is about to figure out just how much of an outsider he really is.

Patrick Flint feels a calling to volunteer at the impoverished Indian Health Services clinic on the Wind River Reservation that he can't completely explain. His wife Susanne supports him—usually—but her family is coming for their first Wyoming visit, twelve-year-old Perry is stir crazy and looking for trouble, teenager Trish is dangerously in love, and she and Patrick are in the final stages of negotiations on their dream house. The Christmas holidays are not a convenient time for him to be gone, or to be out of communication, which is exactly what happens when a series of blizzards knocks out power and phone lines all over the region.

When Patrick arrives in Fort Washakie to a flirty reception from the young clinic manager, Constance, he discovers Big Mike Teton, a tribal council member, dead in the parking lot. The circumstances point toward poisoning, but local law enforcement pooh-poohs that idea the second Patrick brings it up. So does Big Mike's widow—none other than the lovely Constance.

Stranded in the storm, Patrick follows his heart and the medical evidence in his quest to figure out what killed Big Mike. No one on the reservation seems happy about his involvement. But they aren't half as unhappy with him as Susanne is back in Buffalo when their realtor calls with a make-or-break counteroffer on the house, and she still can't reach him after two days of radio silence.

As Patrick's investigation begins to ruffle the wrong feathers, a frantic Susanne loads up the kids and her extended family for a trek across Wyoming to roust her husband, only to discover she's not the only woman with a strong interest in the good doctor.

This title is due for release on December 9, 2019
We'll send you an email as soon as it is available!