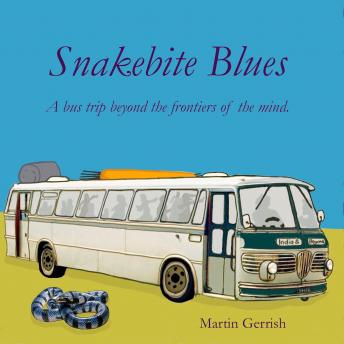 Snakebite Blues: A bus trip beyond the frontiers of the mind.

Fifty spiritual seekers travel overland on the hippie trail to India in two buses. The journey into the spiritual wisdom of the east will be one long party, an eco-socialist encounter group and a psycho-spiritual trip beyond the frontiers of the mind. Together with the sexual politics of making love not war, what could possibly go wrong? After colliding with the political and religious realities of 1977 in Tito’s Yugoslavia, Sufi zikrs in Turkey, revolution in Persia, bio-energetics in the desert, banditry and love in Afghanistan, they reach India. Martin then wanders alone on his search for enlightenment accompanied by snakes, sadhus and self-doubt. Many adventures later, including dancing with Baul Mystics, getting lost in the jungle, being mistaken for a sadhu and travelling with a dope dealer into a Delhi slum, he re-meets his comrades in Delhi. They drive to the ashram of their guru, Osho, in Pune where Martin hopes to find an enlightenment in which inner anguish, sexual jealousy and British empire guilt will never trouble him again. But every Eden has its snake. And Martin discovers, not for the first time, that you meet what you are running from on the very road you take to avoid it.

Snakebite Blues: A bus trip beyond the frontiers of the mind.