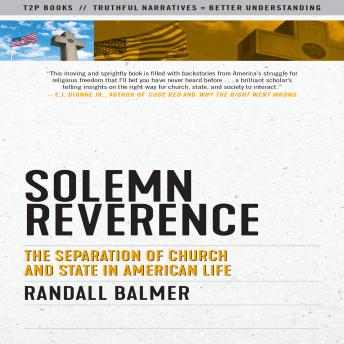 Solemn Reverence: The Separation of Church and State in American Life

'A slender but thoroughly argued case for reinforcing the wall between church and state. . . A stern warning that those who push for the intrusion of religion into public life do so at the peril of both.' -- Kirkus Reviews

The First Amendment to the US Constitution codified the principle that the government should play no role in favoring or supporting any religion, while allowing free exercise of all religions (including unbelief). More than two centuries later, the results from this experiment are overwhelming: The separation of church and state has shielded the government from religious factionalism, and the United States boasts a diverse religious culture unmatched anywhere in the world. In Solemn Reverence, Randall Balmer, one of the premier historians of religion in America, reviews both the history of the separation of church and state as well as the various attempts to undermine that wall of separation. Despite the fact that the First Amendment and the separation of church and state has served the nation remarkably well, he argues, its future is by no means assured.

Solemn Reverence: The Separation of Church and State in American Life