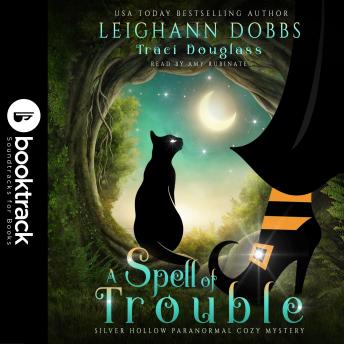 This edition of A Spell of Trouble is enhanced with a musical soundtrack from Booktrack for an immersive listening experience!

When town trouble maker, Louella Drummond, drops dead in front of Isolde Quinn's pet store just minutes after threatening both Issy and her cousin Graeme, the police in the small lakeside town of Silver Hollow assume it's from natural causes.

... Until it's discovered that Louella was murdered.

Not just any murder, though. Murder by paranormal means. Dark magic that could only have been performed by a powerful witch. And every law-abiding paranormal knows that dark magic is forbidden and carries strict punishment at the hands of "the committee" - the mysterious entity that provides law and order within the paranormal community.

Being witches, Issy and her three cousins fear they are at the top of the suspect list. To make matters worse, a secret division of the FBI has gotten wind of the happenings in Silver Hollow and sent two agents to ferret out paranormal activity. Even worse than that, Issy is annoyingly attracted to one of them!

Armed with their unconventional posse of familiars, Issy and her cousins dodge the efforts of the 'real" police and the special FBI agents while following a twisty path of clues that lead to a shocking betrayal.