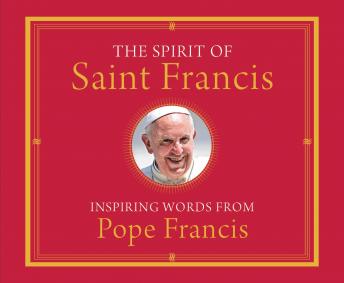 The Spirit of Saint Francis: Inspiring Words from Pope Francis

"Some people want to know why I wished to be called Francis. For me, Francis of Assisi is the man of poverty, the man of peace, the man who loves and protects creation."
- Pope Francis, March 16, 2013.

Published in cooperation with the Libreria Editrice Vaticana, the Vatican Publishing House, this original collection brings the life and legacy of Saint Francis of Assisi to life through the pope's uplifting and challenging words.By taking the name of one of the most venerated figures in Christendom, Pope Francis set a high bar for his papacy. Saint Francis renounced wealth and honor in order to proclaim the Gospel message to a lost generation. His exuberant love for God and radical example of Christian life awakened hope in countless followers and renewed the Church.

Pope Francis's inspirational homilies, addresses, and writings on Franciscan ideals such as simplicity, humility, forgiveness, joy, compassion, peacemaking, and care for creation give you a simple way to renew your faith.