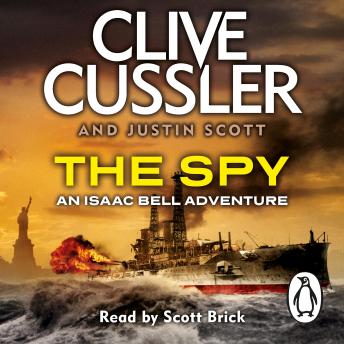 The Spy is the third of Clive Cussler's brilliant historical thrillers.

1908, and American engineering geniuses are being killed off one by one . . .

When a brilliant battleship gun engineer commits suicide, his disbelieving family turn to legendary Van Dorn Detective Agency. Quickly on the case, Isaac Bell establishes that the clues point not to suicide, but murder.

So when further deaths connected to a top-secret project follow, Bell realizes that this is sabotage. With the world plunging towards war, it's clearly a spy at large. But which of the many foreign agents he has encountered is responsible? Or is there a more sinister explanation?

In a blistering story featuring dreadnaught battleships and railroards, criminal gangs and beautiful women, The Spy is a breathtaking thriller that just happens to have at stake the fate of the world.