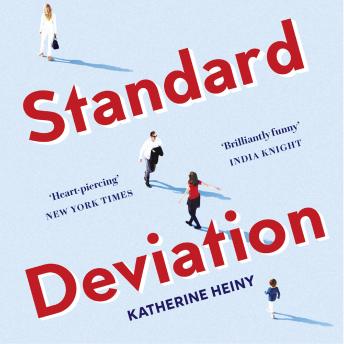 ‘I have rarely seen modern marriage reproduced so faithfully in print. It’s about love once the early romance has subsided. Hilarious’ Jojo Moyes, Woman and Home
‘Standard Deviation is a marvel’ Kate Atkinson
‘Addictive reading’ Mail on Sunday
‘A comic masterpiece’ Observer

A divinely funny novel about the challenges of a good marriage, the delight and heartache of raising children, and the irresistible temptation to wonder about the path not taken.

Graham Cavanaugh’s second wife, Audra, is everything his first wife was not. She considers herself privileged to live in the age of the hair towel, talks non-stop through her epidural, labour and delivery, invites the doorman to move in and the eccentric members of their son’s Origami Club to Thanksgiving. She is charming and spontaneous and fun but life with her can be exhausting.


In the midst of the day-to-day difficulties and delights of marriage and raising a child with Asperger’s, his first wife, Elspeth, reenters Graham’s life. Former spouses are hard to categorize – are they friends, enemies, old flames, or just people who know you really, really well? Graham starts to wonder: How can anyone love two such different women? Did he make the right choice? Is there a right choice?