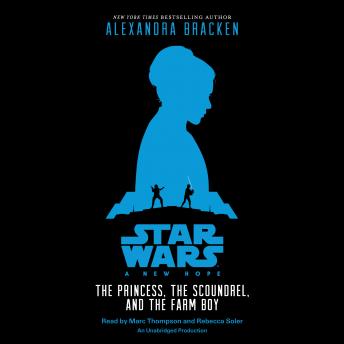 Star Wars: A New Hope The Princess, the Scoundrel, and the Farm Boy

The galaxy is at war.

Although the Rebel Alliance has won a few battles against the Empire, hope is fading. The Empire is about to finish building the greatest weapon the galaxy has ever seen-the Death Star. The rebels' only chance to defeat it now lies in the unlikely hands of a princess, a scoundrel, and a farm boy. . . .

Acclaimed, New York Times bestselling author Alexandra Bracken delivers a captivating retelling of Star Wars: A New Hope like you've never experienced before. Since the premier of the original film, Princess Leia, Han Solo, and Luke Skywalker have become iconic, larger-than-life characters. The Princess, the Scoundrel, and the Farm Boy takes a deeper look at these three heroes as they join forces to defeat the evil that threatens their entire galaxy.

Star Wars: A New Hope The Princess, the Scoundrel, and the Farm Boy