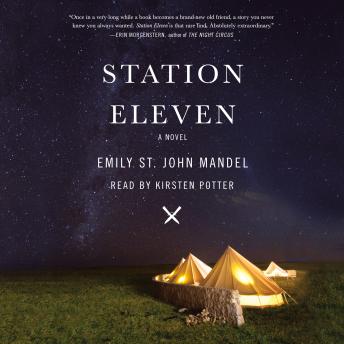 NATIONAL BESTSELLER • An audacious, darkly glittering novel set in the eerie days of civilization’s collapse—the spellbinding story of a Hollywood star, his would-be savior, and a nomadic group of actors roaming the scattered outposts of the Great Lakes region, risking everything for art and humanity. Now an original series on HBO Max. Over one million copies sold!

Kirsten Raymonde will never forget the night Arthur Leander, the famous Hollywood actor, had a heart attack on stage during a production of King Lear. That was the night when a devastating flu pandemic arrived in the city, and within weeks, civilization as we know it came to an end.

Twenty years later, Kirsten moves between the settlements of the altered world with a small troupe of actors and musicians. They call themselves The Traveling Symphony, and they have dedicated themselves to keeping the remnants of art and humanity alive. But when they arrive in St. Deborah by the Water, they encounter a violent prophet who will threaten the tiny band’s existence. And as the story takes off, moving back and forth in time, and vividly depicting life before and after the pandemic, the strange twist of fate that connects them all will be revealed.

Gorgeous storytelling! In spite of talking about some tragic events, the author keeps it optimistic. I loved every minute of this book.

I loved the story! So creative and original! the narration was quite good too, I just wish there had been more variation in the characters' voices.

It was an interesting story, although the various plot lines did not weave together in a way that felt like it flowed for me, it could be somewhat disjointed.

Such a good read!

I probably should not have chosen to listen to this book in the time of COVID-19 as the post-apocalyptic setting was brought on by a mysterious flu that decimated most of humanity, but the story caught my interest early on so I stayed with it. The story is imaginative and complex, and I like the way it eventually coheres into something that's more than the sum of its parts. Excellent narration that doesn't feel at all forced like audiobook readers can often sound to me.

A scary read (listen), but it was so well done. She puts you right there with all of the tension and hilarity a scene might bring. You could quibble that Tyler was not well developed, but overall, you got a solid feel for who the key players were in a deeper sense. Some may see a rush to finish the ending, but I felt the pacing was good throughout. I will be ordering her new book for sure.

I was expecting something different based on the description. The beginning of the book was very engaging and kept me awake to find out what would happen next. The middle of the book was a lot of filler and timeline bouncing which made the story a little difficult to follow. Then the ending happened really fast and I'm still not sure why it ended so suddenly. I wanted something more... more of the beginning, more story.

I was really disappointed with this book. The first book I have had to write a bad review. Many of the characters I just didn't even care about. Just as the book started getting better it was over. It ended with too many unanswered questions. I don't know if that was done to make room for a book series or not, but it just left me feeling like I wasted my time.

My first audio book! One narrator, yet so many nuances for each character, and for each mood in the narration.

Interesting ideas and fun to think about. Good descriptive writing

Captivated throughout, but felt a little disappointed by the resolution. I suppose a second reading might change that, but upon first go, just ended up being a so-so book