The Story Of Tracy Beaker, The & Dare Game 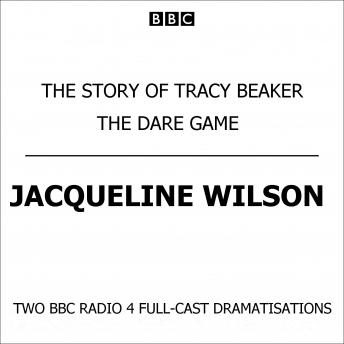 A BBC Radio 4 full-cast dramatisation of Jacqueline Wilson's favourite character, Tracy Beaker, who lives in a children's home. Ten-year-old Tracy is smart and full of energy but more than anything she wants love. In 'The Story of Tracy Beaker', Tracy doesn't know where her mum lives but that doesn't stop her having long imaginary conversations with her. She's had two foster families before which haven't worked out, but hopes a woman named Cam will be her next foster mum. In 'The Dare Game' Tracy is now living with Cam and starting a new school. Things seem to be looking up for Tracy - but then the trouble begins. She has a horrible teacher, the other kids laugh at her and things between her and Cam aren't going as well as expected. Tracy's friends, Alexander and Football, are having their own problems too. Then one day, out of the blue, who should appear but Tracy's long-lost mum. Starring Victoria O'Donnell as Tracy and Rebecca Front as Cam.