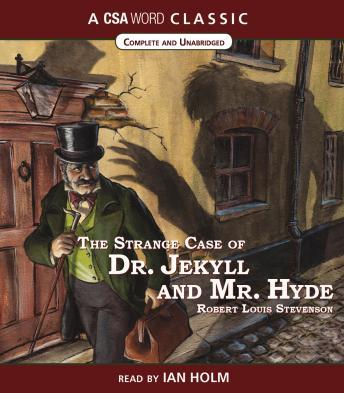 The Strange Case of Dr Jekyll and Mr Hyde

The Strange Case of Dr. Jekyll and Mr. Hyde is a terrifying glimpse into both a horrific gothic scenario and a psychological phenomenon of 'dual' personality. The novel was well ahead of its time in 1886 and continues to be a firm favourite in the horror genre and beyond.

Dr. Henry Jekyll creates a mysterious elixir, which he hopes will help to enable him to explore the hidden depths of his personality. Coinciding with his experiment, Mr. Edward Hyde starts to appear more frequently on the London scene, often by night, and always leaving a trail of destruction and fear in his wake. When Mr. Hyde is seen disappearing into Dr. Jekyll's office, tongues begin to wag - how are the two men related, and can the evil Mr. Hyde be stopped before a scandal ensues which threatens to engulf the mild-mannered Dr. Jekyll too?

This title is due for release on May 20, 2010
We'll send you an email as soon as it is available!