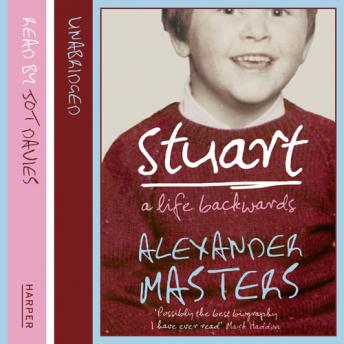 A unique biography of a homeless man and a complete portrait of the hidden underclass.


‘So here it is, my attempt at the story of Stuart Shorter, thief, hostage taker, psycho and sociopath street raconteur, my spy on how the British chaotic underclass spend their troubled days at the beginning of this century: a man with an important life. I wish I could have presented it to Stuart before he stepped in front of the 11.15 train from London to Kings Lynn.’


Stuart Shorter’s brief life was one of turmoil and chaos. In this remarkable book, a masterful act of biographical restoration, Alexander Masters retraces Stuart’s troubled journey. Stuart was homeless, with many of the problems this sub-section of English society display; alcoholism, drug-addiction, crime, violence. Scattered with glimpses of the author’s friendship with Stuart in the years before his death, Masters gives us Stuart’s life in reverse, tracing his route backwards through the post-office heists and attempts at suicide and the spells inside many of this country’s prisons, on back to a troubled time at school and learning difficulties and a violent childhood that acted like a springboard into the trouble that was to follow him all his life.


This extraordinary book is a glimpse at the underbelly of English society, a world largely hidden from our lives. Funny, despairing, uplifting, brilliantly-written, it is one of the most original biographies of recent years.