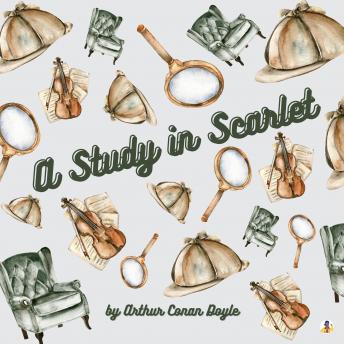 A Study in Scarlet is a detective novel by British author Arthur Conan Doyle.

A Study in Scarlet marks the first appearance of Sherlock Holmes and Dr. Watson, who would become two of the most famous characters in popular fiction. The book's title derives from a speech given by Holmes, an amateur detective, to his friend and chronicler Watson on the nature of his work, in which he describes the story's murder investigation as his 'study in scarlet': 'There's the scarlet thread of murder running through the colourless skein of life, and our duty is to unravel it, and isolate it, and expose every inch of it.'

A Study in Scarlet was the first work of detective fiction to incorporate the magnifying glass as an investigative tool.

The story begins in 1881, when Dr. Watson, having returned to London after serving in the Second Anglo-Afghan War, runs into an old friend named Stamford at the Criterion Restaurant, who had been a dresser under him at St. Bartholomew's Hospital . Watson confides in Stamford that, due to a shoulder injury that he sustained at the Battle of Maiwand, he has been forced to leave the armed services and is now looking for a place to live. Stamford mentions that an acquaintance of his, Sherlock Holmes, is looking for someone to split the rent at a flat at 221B Baker Street, but he cautions Watson about Holmes's eccentricities.