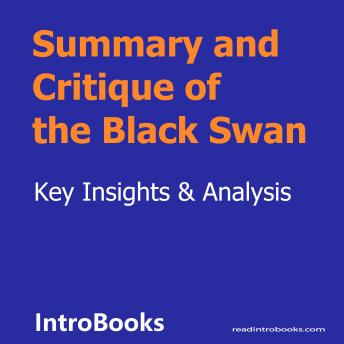 Summary and Critique of the Black Swan

Nassim Nicholas Taleb is a Lebanese born American literateur, scholar, essayist, trade-cum-risk analyst, statistician and so on. His multi-faceted talent and the ability to wander freely amongst diverse faculty of subjects have made him a force to reckon with in the gamut of global intellectual society. Most of Taleb's works are related to the dilemma of volatility, probability and uncertainty.

Nicholas Taleb was born in Amioun (Lebanon) in the year 1960. He is an author of international fame and has served as an academician in several universities and is currently positioned as a distinguished professor of Risk Engineering at the New York University (Tandon School of Engineering).

He has authored so many books to devour. The Black Swan, Antifragile, Skin in the Game, Fooled by Randomness, The Bed of Procrustes, Dynamic Hedging to name a few (combinedly called Incerto) are termed as Taleb’s most outstanding creations in the contemporary literary world.

Nassim Nicholas Taleb has had devoted a good 21 years as a risk-taker (quantitative trader) before becoming a wanderer and researcher in spheres of mathematics, philosophy and largely potential problems with chance and probability. Over and above being impressed as a trader, Taleb has also written over 50 academic articles in multiple subjects as a sequel to Incerto. The topics covered are from physics, philosophy, statistics, economics, ethics, quantitative finance and international affairs. The central idea in all these creations has centered on the notion of risk and probability with an undercurrent of randomness.

Summary and Critique of the Black Swan